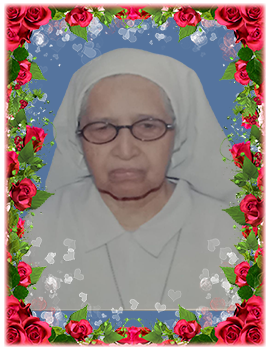 “Before I formed you in the womb I knew you and
before you were born I consecrated you” Jer 1: 5

Sr Ancilla was privileged to receive the call of God and offered herself whole heartedly to the Lord as she was born on 2nd Feb 1928, the day of the Presentation of the Lord, in Thrissur, Kerala for the pious parents Mr. Augustine Vanathu Perampil and Mrs. Elizabeth Challissery.She was the eldest among the three boys and three girls. Though her maiden name was Mary Augustine, she was affectionately called as Baby.

The day of her first Holy Communion and confirmation at the age of 7, in the capuchin monastery was the happiest and unforgettable day in her life. While she was doing High School, she was very much taken up by the kindness and gentleness of Sr. Emilie SCC, her cousin who came for holidays and was her inspiration to join our congregation, as per her wish to be far away from home as a missionary. As a young girl, she used to visit her cousin sisters, Srs. Emily, Josephine, Cecile, Aloysia and Sr. Eusubius who were the members of our congregation. Once when she and her father happened to meet Mother Sophie, she also motivated her to join the congregation.

Being confirmed of God’s call to this congregation, sister Ancilla came to Fort in 1950 along with Srs. Jecintha and Cecile. She entered the pre-novitiate on 2nd July 1950, novitiate in 1951 and made her first profession on 4th Jan. 1953 at Amravati. She committed herself totally to the Lord and offered her life on 4th Jan 1956 in Fort, Trichy.

From 1953 to 1977 Sister was at Fort community fulfilling the responsibilities of being in-charge of Mess, Parlour and School Office. She was sent as a student in 1977 by Mother Marie Cecile for Sudeep Course at Bangalore.

From 1977 – 78 sister was in Novitiate community working in Government Hospital. From 1978 – 83 she was accomplishing the task joyfully as Needle work mistress, in-charge of Creche and Chapel at Cantonment. After finishing a year of training at Mambalasalai, she continued her mission as Needle work mistress in Kallakudi, Oddanchathram and Nellore from 1983 to 1994. The poor and the needy found place in her heart as she was fortunate to spend most of her time as Needle work Mistress. She chose to be humble and hidden like our Mother Foundress.

Sister had a charming and angelic look and was lovingly called as ‘Fairy’ by everyone. Many young girls who were attracted by her wanted to join the Congregation. She radiated God’s love by instructing them to read Bible and share her experiences. She was kind, gentle, prayerful, sacrificing, not seeking to be someone but identifying with the suffering servant of God. She led a simple and cheerful life.

In 1993, as the sisters were going for mass in Nellore, a lorry dashed on the vehicle. The Jeep rolled twice and sister lost her right arm in the accident. Sr Ancilla has written in her Biography that “This accident gave a turning point in my life. My pride came down because I had an independent nature. Now I began to depend on others for my needs.”

After her treatment she continued to serve in the community at Madras taking care of the chapel and parlour joyfully. She returned to Cantonment in 1998 and continued her mission as prayer warrior till 2010. Her soft voice and her gentleness revealed her constant communion with the Lord.

In 2010 Sister was diagnosed for cancer of the breast and underwent mastectomy after which she was shifted to Fort community. From then onwards she became very active in her apostolate of prayer interceding for the community, congregation, church and the world at large. In September 2021 Sister had a fall and underwent surgery which made her confined to her bed. Though she underwent a lot of physical sufferings, not a word of complaint escaped her lips. Instead, she united herself with the crucified Lord, living the paschal mystery. A flower does not force itself to exude its fragrance. Likewise, our beloved sr. Ancilla, naturally exuded God’s love and mercy to all those who came in contact with her especially the poor people. She was quite contented, full of gratitude, peaceful and asking Jesus to give her the grace to accept His plan till she breathes her last.

Having lived 69 years of fullness in the Lord as an ardent follower of Jesus Christ her Master. She was always ready to meet her spouse in heaven as early as possible. Whenever the sisters went to meet her, she used to say “I am ready to go to heaven” Her preparedness to meet the Lord was a great inspiration to all of us. Her love and devotion for the Blessed Mother was visible and edifying when we saw her, promptly reciting the rosary loud even at her death bed.

Jesus was well pleased with the simple and unassuming life of our dear Sr. Ancilla and received her soul as she surrendered it in the presence of the whole community, after receiving the Holy communion at 8am on 13th Jan 2022 after living 94 years on earth.

Our beloved Sister Ancilla you were a joyful and exemplary religious who sought only God’s love and attached to things that are of God and not of the world. We miss you dear sister, your company, prayerful support and encouraging words. Your life has touched each one of us and has left an imprint in us to be grateful and happy. As you have fought the good fight and finished the race kept the faith, may the Good God reward all your sacrifices on earth and grant you eternal bliss. We bid you farewell dear sister, till we meet again in heaven.

May the angels go with you, To the home of God’s glory
May the saints bid you welcome, To the land of the living.

Your loving sisters of Fort community,
Province of Tiruchirappalli.
14-01-2022