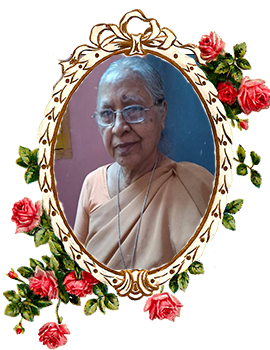 “I have fought the good fight, I have finished the race, I have kept the faith From now on there is reserved for me, the Crown of righteousness Which the Lord the righteous judge, will give me on that day “. 2 Tim. 4:7-8

Sr. Miriam Therese was born as the third child to Mr. Antonisamy and Mrs. Arpudamary on 27th February 1938 into the family of deep faith in God and love for humanity at Varaganeri, Tiruchirappalli. Sr. Miriam was loved, petted and cared by her family and was very precious to her brothers and sisters. She was a loving, affectionate daughter and sister. She was good at studies and her father, who was a teacher used to invite the less privileged children of the locality to his home in order to assist them in their studies. This made her more responsible in her behaviour towards others in society and helped the students in their studies. She also helped her mother to make some edibles for those children, who would have starved at home.

Her parents were pious and faithful Catholics who brought up their children with strict discipline and with strong religious consciousness. Sr. Miriam used to go for daily mass and loved reading the lives of saints specially the life history of St. Teresa of the Child Jesus, Blessed Alphonse and St. Francis Xavier. She was inspired by their heroic Spirit, dedication and sacrifices they made in their lives. Her longing to join the Great Carmel order was bluntly refused by her Father but with much struggle she got permission to join Sisters of the Cross in June 1958 where she studied, with five other companions. She had a feeling that she was loved much at home as well as by her Novice Mistress Mother Theophine. She took life very seriously and made her First commitment on 21st December 1960. Her first community was Fort, started to work in the office, co-coordinating, unifying and even rectifying things with the help of senior sisters. There she learnt to keep up confidence and help the senior sisters, specially the sick and ailing members. She had the gift of relating with different people amicably and had learnt the art of silence.

In the year 1969, she was enrolled as a student of Commerce in a Hindu college at Nagercoil. She had secured a Gold Medal in Commerce. Then she worked as an Assistant Superior and Bursar at Mater Dei, Goa for three years. She was spiritually enriched by the courses attended to serve the Lord joyfully and fruitfully. After this she was appointed as Province Bursar and in charge of the Technical Institute at Mambalasalai. Later she took charge of the community at Fort from 1979 to 1982. Simultaneously she completed her Master of Commerce in Venkateswara University, Tirupathi in the distant mode of education.

Deeper study of our Origin and charism made her serve the poor in a village set up at Vadugarpet in 1982 to 1992. While working in the school she completed her B.Ed. in Annamalai University in the distant mode of education. She worked in Vadugarpet School for 5 years later she joined the Community at Kallakudi visiting the villages in the neighborhood and giving non-formal education in tuition centers, after her class. From 1989 to 1990 she lived in the village called Pudur – near Kulithalai and was engaged in evangelization and social work.

After her retirement from 1997 to 2000 she was in Novitiate as Sister- in- Charge to re-live and share her youthful spirit with others. From 2000 to 2002, she was Sister -in- Charge of the community at Golden Rock and 2002 to 2004 she was the Sister-in-Charge of Oliyamangam community. From 2004 to 2007, she was in charge of Diocesan Nursery School – Christ the King Matriculation School, at Namakkal and from 2007 onwards she took care of the neglected and deserted women in Shanthi Villa, Destitute Home at Amaithi Nilayam community.

For 14 years till her death, she had been the Director of the Destitute Home – caring and sharing her entire self with the neglected women of our society. Due to vomiting blood, breathlessness and distended abdomen, she was taken to Child Jesus Hospital and got admitted on 18th July 2021. As she was having some internal bleeding and low HB, she was administered one unit of blood but still they could not stop the bleeding therefore she was shifted to GVN Hospital at Mambalasalai, Trichy on 21st July 2021. From then onwards she was administered three units of blood, diagnosis was going on, after doing the endoscopy treatment she was diagnosed to have cirrhosis of the Liver (grade 3 ) subsequently leading to Ascities, portal hypertension and esophageal varices causing Haematemesis and Malena and stomach was getting distended.

After her persistent request, she was discharged from the hospital, on 1st August 2021. She was brought back to Shanthi Villa, Amathi Nilayam. She was with the sisters and the inmates for two days and three nights. After coming to Shanthivilla, she visited all the inmates individually, prayed and blessed them. She handed over all her responsibilities diligently to Sr. Lourdu Adaikalasamy, the newly elected Provincial. On 3rd August 2021, during the evening prayer, all the sisters were gathered around her and she expressed her gratitude to the members of the community and blessed them.

On 4th August 2021, from 2.00 pm onwards her health was deteriorating, she had severe breathlessness, her pulse was slowing down and community members were present to attend to her needs. The end came swiftly and painfully but she could no longer voice her feelings, the Lord alone, whom she faithfully served, could understand her as she breathed her last at 3.00 pm. Till the end of her life, she was very grateful to the Congregation, Province and all the sisters who had guided her towards reaching her goal to follow the crucified Lord.

Always her wish and prayers were authentic and true to her belief. Her love for the poor and the destitute, the less privileged were praise worthy. She never complained about struggles of life but lovingly accepted all the challenges and used it as an opportunity to glorify God. The routine task she performed never led her to boredom or frustration; she was always attuned to the signs of the time and was prompt in responding to it creatively.

Dear Sr. Miriam you have touched our hearts and left a legacy of your hard work, determination and loyalty to the Congregation. Farewell to you dear Sister Miriam, enjoy the eternal bliss with the entire Celestial Court. The great and mighty souls will definitely inherit the kingdom of God and we firmly believe that you are counted one among them.

Good bye to you dear Sister Miriam till we meet again in heaven.